Open everyday from 11 am to 7 pm / free entrance 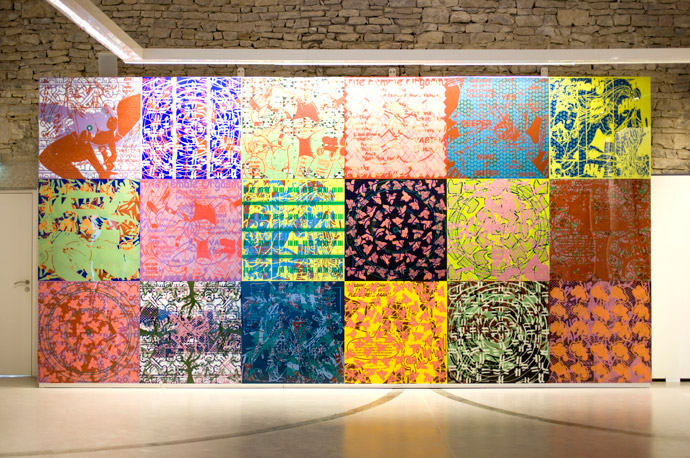 The Courbet Museum of Ornans, France, will present the exhibition Nature, Cultures, The Worlds Origin's, by Jean-Pierre Sergent at his Flagey location. The farm recently renovated as a contemporary art space is the native house of the famous 19th century realistic painter : Gustave Courbet, The show, based on a series of monumental works on Plexiglas, is by an artist who developed a repertory of artistic forms in the United States, and continues to expand on these themes in his studio in Besançon, France.

A monumental wall installation of paintings on Plexiglas from Sergent's new Entropic Suites, 2011 body of work, 3,15 x 6,30 m, will be the masterpiece of this show.

Using a lot of references to the famous Courbet erotics painting's, specifically : L'Origine du monde, depicting in a full frame the sex of a beautiful woman, mother, lover, who knows ? JP Sergent followed his steps and have been working during the summer 2011 for this show on erotics scenes, feminine nudes, and nature components like trees, Butterflies, whales... Some other themes are spirituals yantras drawings from the Hindu tradition as well as a lot of pornographics Japanese's magas materials redraw and printed with his famous silkscreen technic's.

This magnificent show is not to be missed!

THE FARM OF COURBET

Flagey is located 12 km of Ornans, take the direction of Chantrans, and after Silley, make a right to Flagey, the Courbet Farm is on your left.
Access map

INSTALLATION OF THE EXHIBITION

Febrary 29th, 2012, with the technicians : Christine Chatelet, Chris Liardon and a museography by Fabienne Coste and Jean-Pierre Breuillot.

OPENING OF THE EXHIBITION

March 16th 2012, with M. Claude Jeannerot, president of the Conseil Général du Doubs, M. Frédérique Thomas-Maurin, conservator of the Courbet museum, Chris Liardon, in charge of the exhibition programing at the Courbet farm of Flagey.

PRINTING OF THE CATALOGUE