THE PROJECT: The City of Arbois and eleven internationally renowned artists, including five Chinese artists who came specially to create their art on the spot, and five Franche-Comté artists, invite you to come and discover their works of art in the five exhibition venues throughout the city. This exhibition is a collaboration between Arbois and Taiwanese curator Yang Xiwen. The artists will be happy to welcome you during this festive summer artistic tour. A passport will be given to visitors to have stamped in each dedicated place.

PATHWAY OF THE EXHIBITIONS 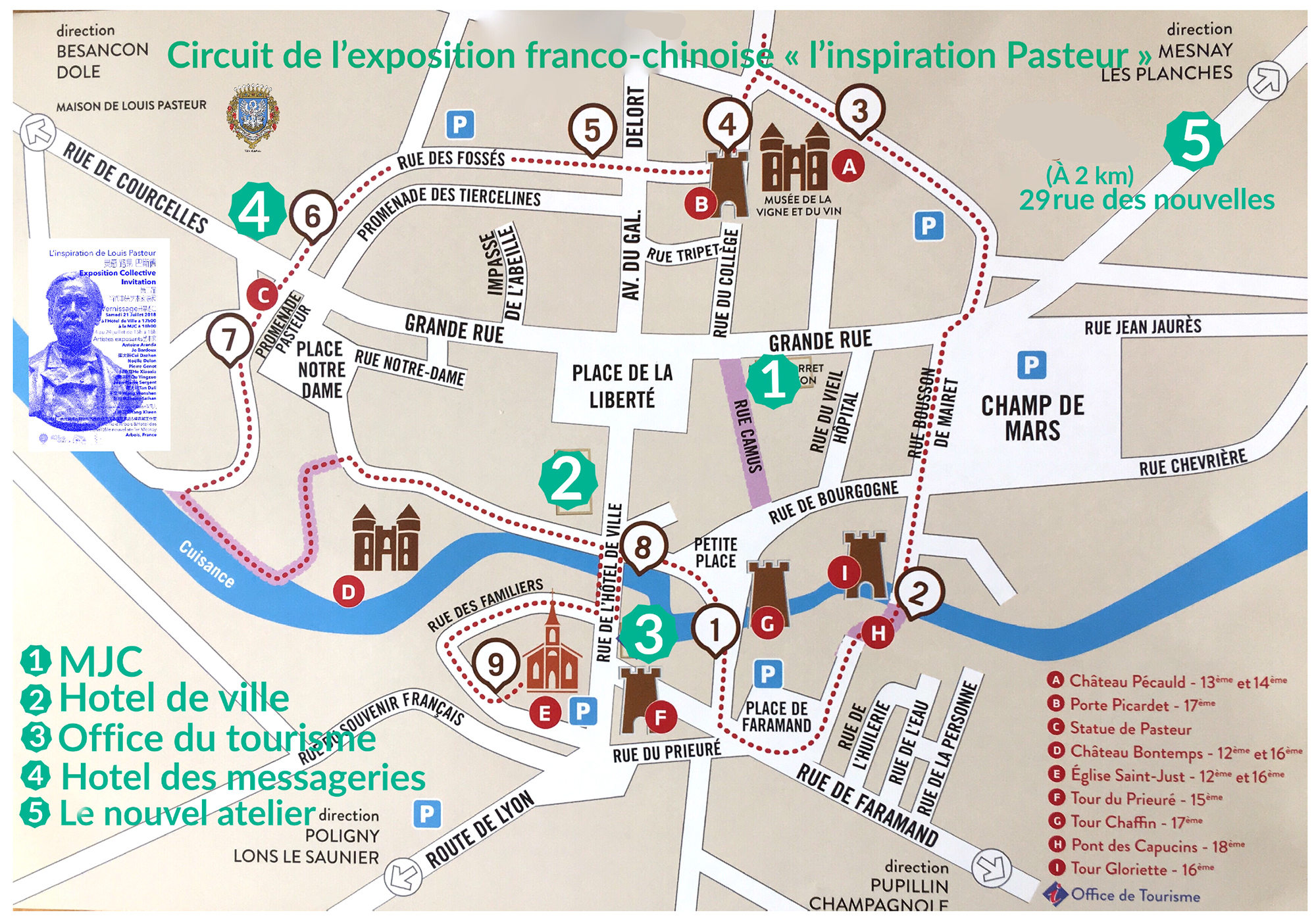 JEAN-PIERRE SERGENT: Franco-New York painter, he now lives and works in Besançon. His work has been exhibited internationally since the 1990s in the United States, Europe and China. During this exhibition he will present at the MJC, for paintings on Plexiglas from the Entropic Suites series (1.40 x 1.40 m, 2015) as well as small works on paper from his new Shakti-Yoni series, Ecstatic Cosmic Dances (38 x 38 cm, 2017-2018).

LOUIS PASTEUR INSPIRATION’S: Under this somewhat catch-all, somewhat popular title, we must reflect on the tense relationship between art and science, intuition and reason. For science, in its primary and humanitarian vocation, is a struggle against death, and art is always a struggle for life. It's apparently the same thing, but there's a small difference!
Presenting at this exhibition images of some Mayan gods like the Chac, demiurge god of rain and lightning in the middle of the 4 suns (Mexican cyclic cosmic periods), as well as the goddess of fertility and love Ixchel, surrounded by butterflies, vehicles of souls in many civilizations; it is a bit of a nosedive at science and contemporary scientists. Would the world still be inhabited by the immaterial and the transcendent? In what proportion and for what purpose?
Were the ancestral cultures and of our European Middle Ages all wrong to believe in enchanted worlds, at once vulgar, obscene, funny, demiurge, divine, mythological and wonderful? Is life only the maya of the Hindus (just an illusion) of chains of events gushing out of nowhere and without reason, like on a cinematographic screen? And at the end of everything, at the last day, at the last breath, will it be a void, an emptiness, or an illumination in a luminous cosmic journey...?
Art has its answer, and it is often mystical. It seems that Pastor, as well as many great men of humanity, were...?
My art thus evokes contemplation, pleasures, delights, sharing... thanks to the bright colors and sexual energies of desires coming from the depths of animal, prehuman, genetic, original, vaginal times... some kind of a huge cosmic Big Bang!
So don't let yourself be seduced and drawn into things that are too obvious and Cartesian! And art, through its presence, its timelessness, its originality, its grace and its beauty, sometimes reveals forgotten and unsuspected worlds, but always alive.