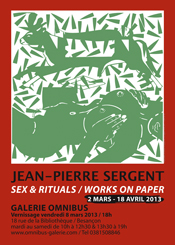 JEAN PIERRE SERGENT AT THE OMNIBUS GALLERY IN BESANÇON

Eve and Pascal Bertrand, the owners of the Omnibus Gallery, a new exhibition space in the center of historic Besançon, are proud to invite you to a showing of works by artist Jean-Pierre Sergent, entitled Sex and Rituals.  The show is composed of works on paper that Sergent completed in New York and in his new studio in Besançon between 2000 and 2011.
Jean Pierre Sergent developed his repertory of artistic forms in the United States and  continues to work and exhibit regularly in France and the rest of Europe. He recently exhibited at two solo exhibitions in major museums He recently exhibited at two solo exhibitions in major museums: the Musée des Beaux-Arts of Mulhouse in 2011 and the Courbet Farm of Flagey in 2102.
The current exhibition will present 22 large mono prints on paper (120 x 107 cm), especially selected from his Large Paper series, along with a selection of numerous smaller works from his Mangas, Tantras & Otras Cosas series.
The title of his current show, Sex & Rituals, is self explanatory.  Sergent ingeniously weaves the explicit sexual images from contemporary Japanese mangas into the iconography of indigenous preindustrial tribal cultures and patterns.
These large works on paper are unframed in order to capture the mixture of bold colors and  the sense of fragility and tenderness that mirror the sexual desires that are a necessity of life. Some images are drawn from the rituals of the Mandam North Amerindians, and of the Mayan God of Corn, Wak-Chan-Ahaw, who was regarded as the one who made everything happen,  the one who created the universe and who fertilized the world.  He is dressed, or undressed by two beautiful, naked mothers-lovers-goddesses, who by their gestures and offerings, bring him back to life and to germination.
Also on show, is a large print on paper Bondage & Freedom (1.5 m x 3 m) of Japanese bondage. The image portrays a beautiful woman reaching climax through bondage. This and other fascinating prints are to be discovered. The show covering 150 m2 of the gallery is an occasion that you will not want to miss.

- VIDEOS ABOUT THIS EXHIBITION 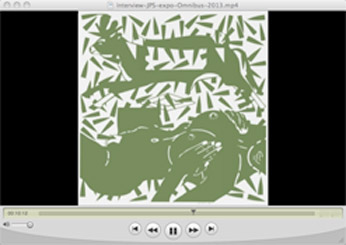 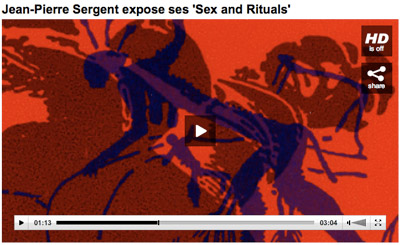 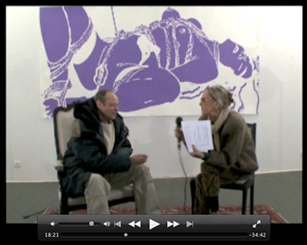